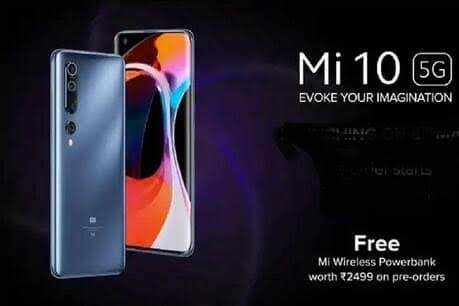 The Xiaomi Mi 10 smartphone was launched on 13th February 2020 and is one of the premium smartphone. The phone packs a lot of good specifications which can wow its users and the main weapon of this phone is its camera. Have a look below its summary

Display:  It has a 6.67-inch AMOLED touchscreen display with a resolution of 1080×2340 pixels which gives an immersive and great display to the user. It also has a cornering gorilla glass protection too.

Battery:  Xiaomi MI 10 is powered by a 4780mAh non-removable battery and it supports wireless charging, as well as proprietary fast charging.

Storage : The phone comes with 8 GB RAM and 128 GB of inbuilt storage.

SIM and Connectivity: Xiaomi Mi 10 has a dual-SIM (GSM and GSM) that accepts Nano-SIM and Nano-SIM cards respectively. It has Bluetooth, Wi-Fi, VoLte, GPS, Infrared etc.

Color Variants: It was launched in Coral Green and Twilight Grey colours.